I found this sushi stall in Ubon Ratchathani in Eastern Thailand.

The guy opens the stall as the sun comes down. From then on there is a constant arrival of customers — some eating on the table laid out and some ordering takeaways. 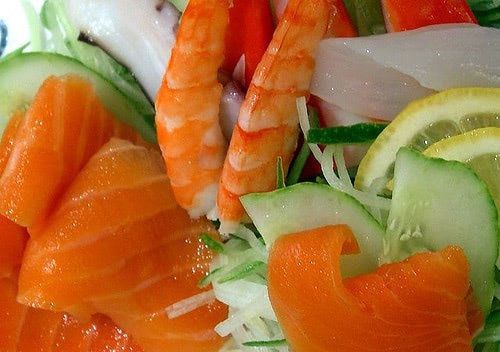 I was telling mousan that Thailand is the only place where I have seen such stalls. She mentioned that such stalls were common in Tokyo (or Edo as Tokyo was then called) during the Edo period. Bit of googling unearthed some history.

In the middle of the 19 Th century, sushi stalls began emerging all over Edo. They were well patronized and endured until shortly after World War II. Many a proprietor of a splendid modern sushi shop got his start as a sushi stall operator.

The stalls had wheels and were hauled into place in the evening. Then the operator hung out his noren curtain to signify he was ready for business. One reason sushi makers did their work sitting down was to keep their feet dry. This continued even after the appearance of high-topped rubber boots in the 1920s.

Since stalls had no pumps of their own, obtaining water was a job in itself. The proprietor had to ask nearby householders for permission to fill several buckets. His initial supply had to last him all evening, so he was naturally careful about the way he used it. The bowl of water he kept for dipping his hands into grew murkier and murkier as the night progressed; it’s doubtful that sanitation was up to today’s standards.

He kept his wares in a box filled with ice, lifting the bamboo mat covering it to display what he had to offer. On the stall’s small counter, he set out one bowl of soy sauce and another of sliced pickled ginger. His sushi rice he cooked at home and brought with him in a wooden container. In winter the container was wrapped with a straw so the rice would not get too cold and unappetizing.

The people who stopped by for a snack, for that is what nigiri-sushi was originally, might be returning from the public bathhouse or men out for the evening on business or pleasure. There was nothing very formal about table manners. Diners helped themselves to the ginger and dunked their sushi, sometimes fingers and all, into the bowl of soy sauce. Dirty fingers were no problem. The noren was right there to wipe them on. At the end of the evening, a well-stained noren was a good sign betokening a large number of customers or a small number of very hungry ones.

The transition from sushi stall to the often elegant shop of today was gradual and began after the Great Kanto Earthquake of 1923. For a while after shops began to be built, the stall remained, parked in front of the shop. Customers who were so inclined purchased and consumed their food out of doors. The chairs inside the shop were mostly for the convenience of people waiting to have sushi packed in boxes to take out. Some sat neither inside nor outside but stood and ate at the front of the shop in an area which, though roofed, was fully open to the street. At this stage, the noren hung from a rod in front of the shop, rather than the stall.

Sushi stalls vanished from Tokyo streets forever after World War II, when Allied Occupation authorities decreed their demise. At first the stall was simply moved indoors to become the sushi chef’s work space and counter. With this arrangement, customers could eat in comfort, no matter what the weather was like. There were no clouds of dust on windy days to worry about and having an adequate supply of water was no longer a problem, but certain practices of old stubbornly hung on. The communal bowls of soy sauce and ginger remained in use, the chef still sat down to do his work, and the customers stood up to eat what he prepared.

From Sushi Cook Book by Yukiko Moriyama quoted at Sushiman.net

Shamian Dao, my little hiding place in Guangzhou Everyone has a hiding place. Mine is the little island of Shamian (沙面) in Guangzhou. Ever since I discovered it in 2002, I keep returning this place

Taiping, the city of many firsts I love traveling in Malaysia. I used to land up in Kuala Lumpur or Johor Bahru and just take a random bus and end up in a random city. Once, on the