The other side of the Himalayas

Early 80’s, my aunt had a vast collection of fiction books. There was this large bookshelf in our hall. Most of the older neighbouring kids would drop in to borrow some books. I figured some of these books had some scam stuff as my aunt would not let the younger ones borrow these. Some experimentation taught me that if I hold one of these scam books by its spine, it will open up, spreading the pages almost evenly. If you looked carefully, there would be distinct gaps between some pages. If you open up this page, 90% of the time you would find some naughty scenes.

Some of the books belonged to my grandfather. Nobody ever borrowed these. By some form of natural selection, these books had slowly moved to the hard to reach the topmost shelf. I was scared of this shelf as I saw a lizard come out of here often. One day, after making sure that the lizard had gone away, I climbed over a chair and started exploring the shelf. There were several books on politics and history. There was this one book with a colourful cover. I pulled out this book and climbed down. This book was about China. I read about the civilisations by the yellow river, the dynasties, the silk route, the Mongols, the Western interference and the subsequent takeover by the communists. There were pictures of the Taklamakan desert and footnotes on Sven Hedlin (the first known person to cross the desert on foot) and other adventurers. There were pictures of little round children from Inner Mongolia and painting like landscapes of pine trees and distant snowy mountains. A strong future miss of China started happening. 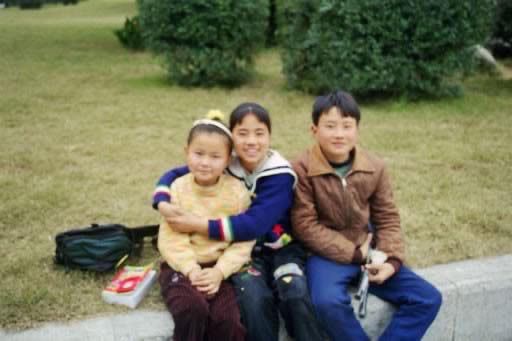 These were the first friends I made in China. I skipped the tourist parts of Guilin city and headed to the residential downtown. I met these kids. They invited me to join their badminton game. The kids got excited when they found the phrasebook section in my travel guide book. They decided to teach me the phrases. Every time I made a mistake, the youngest kid would beat me. I wonder if someday she would become a successful schoolteacher.

A snake snack The other day someone asked me if I have ever eaten a snake. “Yes”, I replied. “How was the taste like?”. “It did not have any taste or rather it

Gazing across the straits, in Gulangyu Gulangyu is an island off Xiamen. This place used to be home to Europeans, so the island has western-style houses. The most striking thing was the