To the end of East (in Tonga)

I spotted this road sign in Nuku’alafu, Tonga. Some things really are upside down in the southern hemisphere. 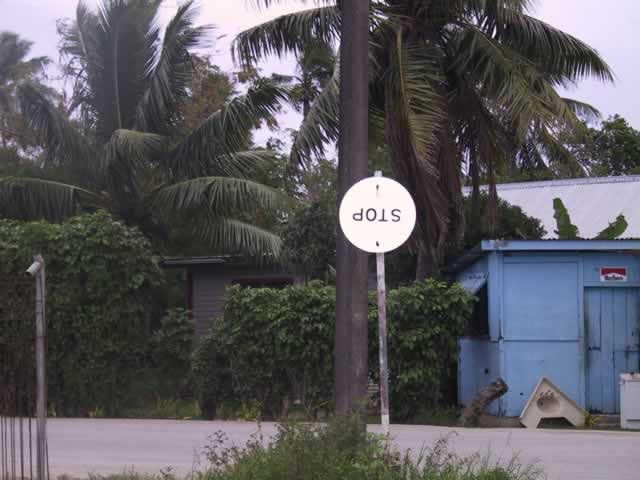 In Suva, there is nothing much to do in the evenings. Foreigners are advised not to go out at night. So I was stuck with the in-house band and bunch of other mostly business travelers (the tourist numbers have reduced to a trickle since the coup) at the place I was staying at. The first evening, I spent with these four young businessmen from China. They told me that they were selling some fisheries equipment. Another Japanse guest I got talking to, told me that the Chinese group does not know anything about fishing. I guess either they are rookie businessmen or maybe they are spies. For two days I pestered the nice woman at the travel desk to find me some way to get to Tonga. Finally, she figured out a tiny plane.

My flight had four passengers. We had a jolly pilot from New Zealand. Tonga was funny. Upon landing, we saw some children sitting on the terminal terrace and waving at us. The immigration guy was amused with my passport, he asked his colleagues to check it out. Tonga is the east-est country in the world, 13 hours ahead of GMT. Tonga lies on the international dateline, so theoretically you could be living in yesterday and today at the same time.

I spent most of the time in Nukualafu, the capital. The name in Tongan means “The Abode of Love”. The people were very friendly, a big contrast from the Tongans a couple of centuries ago. They were the Vikings of the south pacific, attacking and ravaging islands as far as Fiji and Samoa. One of the biggest exports nowadays is the pumpkin.

Trying Kawa in Fiji I spent a week in Fiji running a workshop. At the end of the classes, I was invited to attended a Kawa party. Kawa comes from the root of a pepper

The island of mystery and magic, Siquijor Have you ever ended up some place and never wanted to leave? It happend to me in a little island in the Philippines. I was in Siquijor, an island